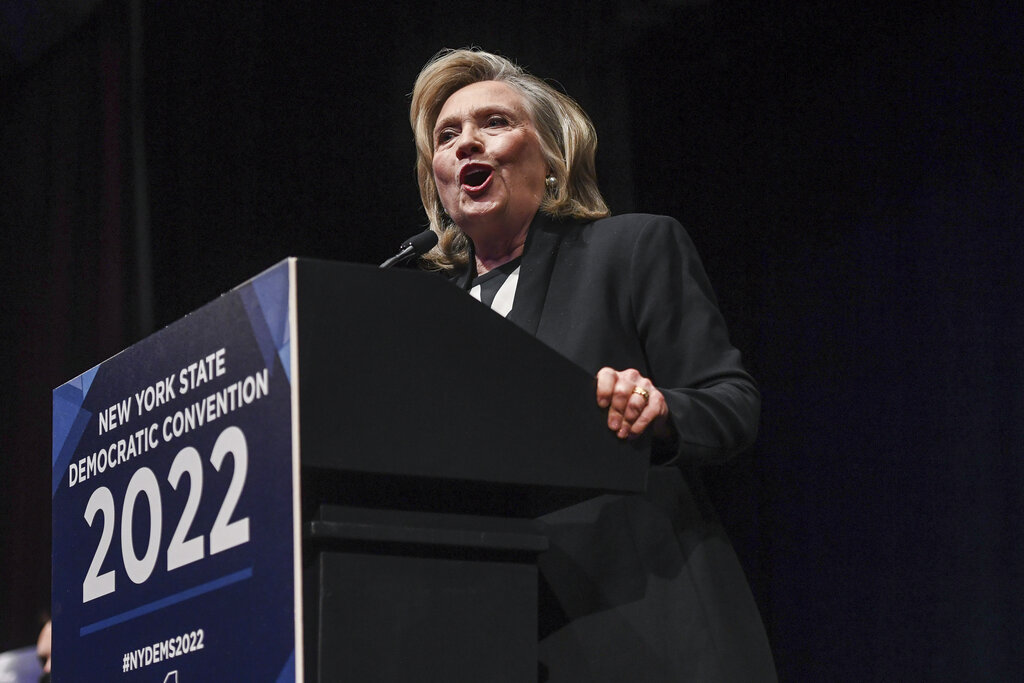 Hillary Clinton took on a barrage of attacks on Donald Trump and his supporters among right-wing hosts and media, as she specifically targeted Fox News.

“Fox is leading the charge in their charges against me, counting on their public to fall for it again,” Clinton said in a speech to Democrats in New York State. “And by the way, they come awfully close to actual wickedness in their attacks.”

Last week, John Durham, the special counsel who investigated the origins of the Trump-Russia investigation, raised new allegations in a court filing. Conservative hosts seized on it as a bombshell that showed the Clinton campaign had been spying on Trump. The New York Post had a cover Tuesday with the headline “Hillary the Spy,” and a Fox News chyron read “Hillary is the real insurgency” on the Jesse Watters show.

In fact, according to several fact-checking stories from outlets, including The New York Times, The Washington Post and CNN, Durham’s allegations, which implicate an internet security expert working for the US government and a law firm that worked for the Clinton campaign, were old news, not as big as they seem, or potentially misleading. Yet the right-wing media followed it, calling it a Watergate-level scandal, if not more.

A FoxNews.com story claimed that Durham alleged that lawyers for Hillary Clinton’s 2016 presidential campaign paid to “infiltrate” servers belonging to Trump Tower and later the White House, in order to establish an “inference” and a “narrative” to bring to federal government agencies linking Donald Trump to Russia. The word “infiltrate”, however, does not come from the Durham dossier but from the comment of a Trump ally, Kash Patel.

Watters, meanwhile, claimed that “Durham documents show that Hillary Clinton hired people who hacked into Trump’s home and office computers before and during his presidency, and filed evidence that he was in league with Russia. Yeah. You heard it right. But Durham makes no such allegation in its filing. Politifact called Watters’ claim “false.”

Clinton’s reference to “genuine malice” has legal significance. This is the threshold that public figures like her should meet to prove defamation claims. Last week, Sarah Palin lost her lawsuit against The New York Timeswith a jury ruling that the publication was “not responsible” and a judge concluding that its legal team had shown no evidence of “actual malice”.

Fox News picked up part of Clinton’s speech but cut it. A spokesperson did not immediately respond to a request for comment.

In her speech, Clinton said, “Funny, the more Trump gets into trouble, the crazier the accusations and conspiracy theories about me seem to get. But now his accountants have fired him as investigations are closing in on him, and just on cue, the noise machine kicked in, didn’t it? »

“I am not here today to start a war, but to prevent one”